Singapore has a great street food scene, some of it is similar to the Malaysian coffee shop style where several vendors will be inside one place with shared tables and a specific drinks seller. Being Singapore there are also some very upmarket places which sell a variety of amazing types of cuisine in very modern settings. One thing which we had not expected to find, however, was that some of this street food was so good it had earned itself a converted Michelin star! 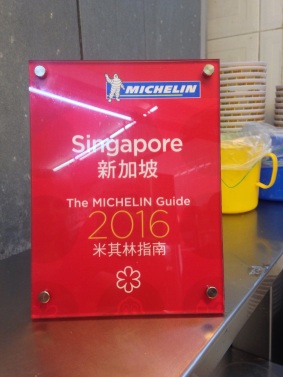 One of these places was the Hill Street Tai Hwa Pork Noodle stall. It sold three dishes, Minced Meat Noodles, Pork Ball Soup and Kway Teo Soup. Naturally finding out that Michelin starred street food was a short walk away from our hotel and would only cost around 15 dollars for the two of us we decided we had to go! We arrived early, at around 11:30am and found ourselves at the back of a long queue. The Michelin guide had been published two days before and it was clear that there were a lot of Singaporeans wanting to have a taste!

We dutifully waited in line, and soon realised it was going to be a long wait. After an hour we were still only somewhere in the middle of the line. After another hour we were finally at the front and ordered, we both went for the Minced Meat Noodles having seen so many coming out of the kitchen – it looked irresistible!

I went to find a seat while Sarah stayed to collect the food and had a good chance to watch the chefs in action cooking some Michelin Star street food. 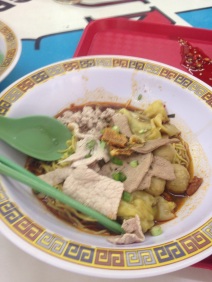 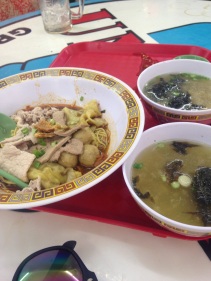 When our food arrived it smelled so inviting, after a two hour queue we were so ready for the enormous portions put in front of us! The noodle dish consisted of a spicy broth, minced pork, crispy pork fat and two other kinds of mystery meat which I would struggle to guess at. It also came with a small soup on the side which tasted meaty and was full of greens. Everything was incredible, the spicy broth had perfectly soaked into the noodles and complimented the meat so well. It had a small kick but was also such a balanced flavour, with no one ingredient overpowering the other! I finished mine far too quickly, and although I regretted not ordering more was not disappointed! I finished my soup soon after and we left. We had both been quite tired after the long waiting time, however, after eating were completely recharged – overall the wait was completely worth it, and the food absolutely deserved its place in the Michelin guide! We both agreed we would happily wait in line to try it again.