Getting around in Central Java can be interesting – really quite interesting! We were staying in Yogyakarta and wanted to make the short hop over to Borobudur to see the temple and stay a night or two in the town. Having asked around we found out that there were tours and taxis that went for between 100,000 – 200,000 – we didn’t really fancy this. Instead of shelling out for a taxi or a tour we decided to take a bit of a cheaper route – after some thumbing through a tatty old Yogyakarta guide and asking around we found out that we could take a local bus which should be a lot cheaper instead, we decided to do this the next morning.

Getting up early and putting on our packs, we set off to find the bus terminal. After being hassled a little by some rickshaw drivers, we were finally convinced (partially due to the weight of our backpacks in the sun and partially to just shut them up) to take a rickshaw to the terminal. As our speed dropped we realised the rickshaw owner was having considerable regrets halfway through the journey. I think he may have underestimated the sheer size of the bags and people who were now heavy laden in front of his bike. Despite our offers to pay him the fare and walk the rest of the way he refused and soldiered on until we reached our destination.

On arrival to the small and slightly shabby terminal we couldn’t find any information, so asked a couple of guys who were hanging around where we needed to be to get to Borobudur. They told us to just stay where we were and one of them after checking his phone told us to wait 20 minutes. When the 20 minutes was nearly up the men who were still hanging about loudly shouted that our bus was on its way and to get ready. The urgency with which they spoke seemed a little odd, that is until the bus arrived. Speeding towards the bay was a ramshackle old bus that looked like it was about ten years past retirement – the doors were missing front and back, windows were either wedged open or duct taped closed and the paint was peeling off like skin with sunburn. It was at this point we understood the urgency – without stopping the bus slowed down and a man leant out of the door to grab Sarah’s bag and bundled it along with Sarah onto the bus, he then stuck out an arm for me to grab which I did as we both fell into the bus that was steadily picking up speed.

Once on board we could see that it wasn’t just the exterior that was a bit run down! Inside the seats were barely attached to the bus, wobbling around uncomfortably – unsurprisingly there wasn’t a seatbelt in sight! Despite how ludicrously unsafe the bus was the further we went on the more charming it became to us. The decor was obviously knocked together spare parts but it all had character – from the kitchen clock tied above the driver to the way that there were random charms hanging from odd windows. The man who had earlier extended an arm to me came to collect our fares, we paid the conductor 25,000 each to Borobudur – a bargain compared to the other quotes we were getting! We then got to witness what we both agreed to be the best part of the bus ride. As the bus rattled along the narrow and bumpy streets the conductor would hang out of the back door – as we approached a bus stop he would shout to the people waiting to see if any wanted this particular service, if any did then he would signal the driver to pull in. The driver would direct the bus toward the stop – and without ever stopping swoop in so that the conductor could help passengers bundle their luggage and themselves in. 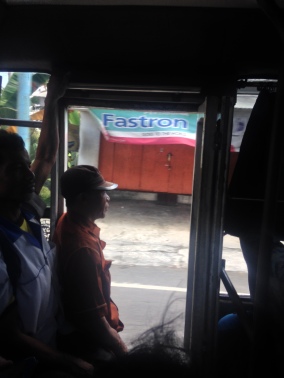 This ridiculously dangerous and hilariously fun mode of service continued for several miles around Yogyakarta until we had assembled quite the assortment of passengers and luggage! There were Sarah and I with huge backpacks, a workman and his toolkit, several school children, an elderly lady who could run deceptively quickly, a busker and his harmonica, and finally a gentleman who had brought a bus seat of his own as luggage. I suspect he may have been aware of the unpredictable interior.

Watching each of these passengers get on was impressive in its own way – whether it was the old lady who managed an almost superhuman burst to catch up to the bus – the man who threw the back then front of his seat then finally himself into the speeding bus – or the busker who seemingly materialised onto the bus playing music and asking for change as if beamed aboard by scotty.

We kept rattling along in this manner with people diving on and off, the bus never stopping for about an hour. After this we reached a large terminal where everybody seemed to depart. We asked if we had reached Borobudur and were told it was a further hour away. The bus stood empty apart from me, Sarah and our backpacks. After about fifteen minutes the driver re-emerged, flicking away the stub of his cigarette, and started the engine. Next a steady stream of tourists began to board, also bound for Borobudur. We couldn’t wait to see their reactions to the service, assuming it may be a first for them as it was for us. The bus then departed, to our confusion, at a leisurely pace! Gone was the swerving and beeping, the crazy driving and passengers diving in! The service felt so – normal.

It turned out that the terminal that we had stopped at was in fact the Yogyakarta bus station. The little shabby terminal we arrived at that morning was the first place the rickshaw driver could find to dump us when he got tired of riding in the sun. The bus we had boarded was a late running local service which was due to change into the Borobudur route. We had somehow managed to stumble into this madness quite unintentionally – but are so glad we did!

My only tip for having a similar trip is to wait for the latest running shabby service you can find and hold on tight!