The journey to Komodo national park is usually only made for one very specific reason. That reason is to see Komodo dragons. These cold blooded Giants are probably the closest thing to dinosaurs that we have left on the planet – and as they live in one very small place if you would like to see them you have quite a journey to make! The islands of Komodo and Rinka are the only two places that these creatures live in the wild, and the easiest routes there are either a 30 hour bus and ferry odyssey from Bali or a flight onto Flores.

We opted for the ferry and bus route to save some money and after a very long journey arrived in Flores which is the main place to stay when visiting Komodo. Arriving in Flores you see dozens of tour operators all offering what is essentially the same package – a boat trip to the island of Komodo or Rinka to see dragons and then a bit of snorkelling off shore. Prices seemed to be set at 500,000, however after a little discussion this was brought down to 350,000. The tours leave early and our tour which was calling at Rinka was leaving at 7am.

The boat set off and we sat up front to enjoy the cool morning air on he way to the island. The trip took about two hours and the heat was picking up by the time we arrived! Upon disembarking on the island we were taken to the ranger station where we had to pay the park entrance fee, the mandatory guide fee, camera license fee and tour fee. We were then given the option of a short, medium or long hike. Having wanted a long hike we sadly found ourselves outvoted by the other members of our group and ended up on the medium route.

As we set out on our medium hike we were very excited at thought of seeing these dangerous creatures in the wild and also somewhat nervous. Our ranger pointed out the first one within thirty seconds of setting off – sat under a tree outside the Rangers office. It was certainly impressive to see, about six feet long just basking in the sun. They look very cumbersome, but we were assured that they had quite some speed on them when they wanted to move! 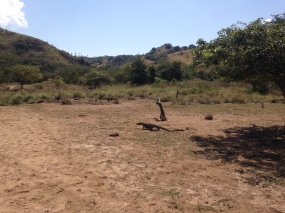 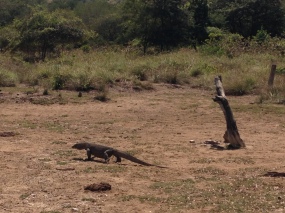 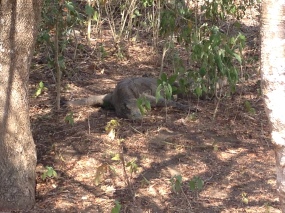 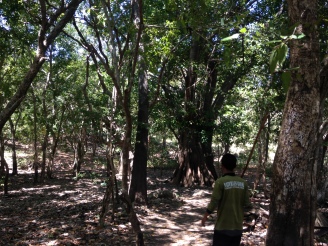 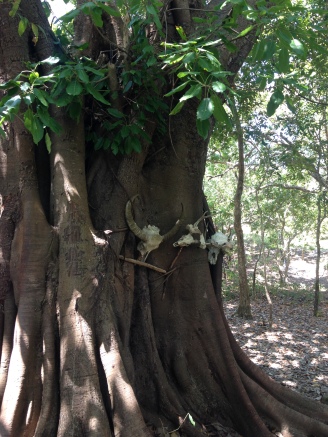 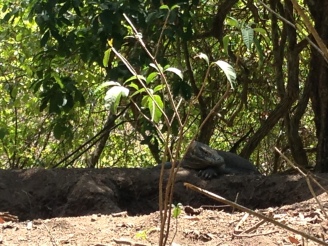 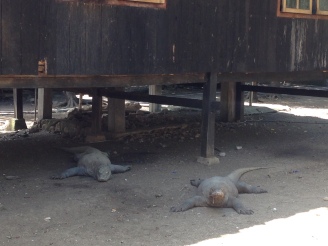 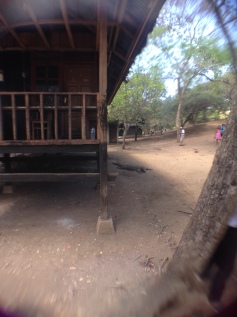 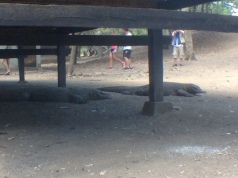 We then walked on into the jungle that filled the centre of the island. We could see signs of water buffalo and plenty of small lizards. We also saw plenty of herds of other tour groups eagerly trying to spot dragons. When we did next spot a dragon it was quite obviously marked out – there was rope blocking the path where it sat. This rope was set up surrounding the dragon so that no one could get too close, the guides also stood around making sure everyone could take it in turns to have a picture and then keep out of the way. This is then how the tour progressed – we would see a rope, somewhere behind it would be a dragon and after queueing for a moment everyone could take their photos. After about an hour of this process repeating itself we returned to the ranger huts. To our surprise we found that there were also dragons underneath them. The ranger told us that they get attracted by the smell of food and lurk in the hope of scraps. This must be convenient as the tours do guarantee a 100 percent chance of dragon sightings.

We left the park, leaving through a Jurassic park like gate, as we left we couldn’t help but ask ourselves – did that count? Was that wild? Of course we had trekked around an island where the Komodo Dragon roams freely, but every sighting of one had a human element to it – a Rangers hut, a blue rope. It was impossible to really know in our minds whether that had counted. That is a question we still can’t quite work out.