A fifteen minute Tuk Tuk ride from Battambang city centre there is one of the more infamous backpacker attractions in Cambodia. It is quirky, fun, and naturally in no way complies with anything close to a health and safety regulation. It is the Bamboo Train. 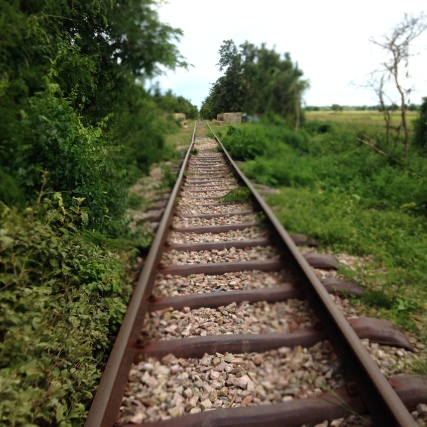 The train consists of small bamboo ‘carriages’ which are powered by a two stroke engine mounted on the back, the track is made from the remains of the Battambang to Phnom Penh line which was badly damaged in the civil war period – seeing its final actual train over twenty years ago.

To ride the train you pay $5 to a driver (someone sitting on the back of your bamboo carriage) and basically just hold on tight. There are no seats – so basically you sit on a cushion in the middle of a flat sheet of bamboo and your driver stands behind. It’s a lot of fun – and quite often feels like the train could fly off the rails at any second! There is just one track and it is used by trains heading in both directions – in the event of one train blocking another there is a quick discussion between drivers, then one train is lifted from the tracks and will wait at the side of the line for the other to pass.

You rattle along for about half an hour until you pull into the ‘station’ which in reality is a small stall selling beer, food and souvenirs. After a short wait you jump back on to go back the other way. We had a great time riding the bamboo train, and we’re glad to have had time to have checked out one of Cambodia’s more obscure attractions. After getting back to Battambang we asked around about the train and found out that it wasn’t purely a tourist thing. There are a few lines dotted around which are used locally for transport between villages and also to haul rice. It was then quite interesting to see such innovative use being made of something so damaged from such a troublesome period of Cambodia’s history.

One thought on “The most dangerous fun you can have for $5 – the bamboo train!”