The colonial city of Battambang was high on our list in Cambodia to visit. The old world architecture and riverside sleepy town vibe described in travel guides had been greatly appealing. Unfortunately, we only had one spare night to make this visit so knew we would have to be pretty organised.

We took the earliest bus we could from Siem Reap – leaving at 7am – to get to Battambang, which to my astonishment arrived exactly on time in the city at 11:30am! As is pretty normal for Cambodia the bus dropped us off a little way out of town on the dusty roadside. We were instantly mobbed by tuk tuk drivers, all of them arguing with each other and ourselves about who saw us first. It was low season and business for these guys was dreadfully slow, so it made us feel genuinely guilty that we were being argued over like this for a 50 cent ride. This is why instead of forcing them to have the largest game of Rock Paper Scissors imaginable we went with the driver we saw chasing the bus pretty far down the highway. He took us to our hotel.

We had booked The Royal Hotel, and it lived up to all of our expectations! The hotel was clearly built in the 1960s and the once grand decor was now a shadow of its former self. However, it had so much character! We had at this point stayed at so many hotels we had lost count, but this one stood out. The lobby was filled with dusty antiques as well as two cot beds we would later find the receptionist and night porter asleep in at 9pm! Our room was filled with fairly worn ornate wooden furniture and decorated with scuffed pastel paintwork. Generally everything about the place reminded me of a Wes Anderson film set! 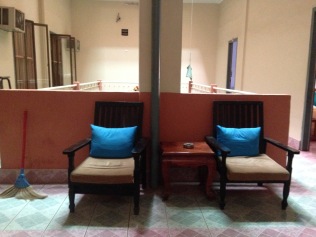 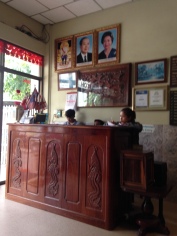 As we were only staying for one night we spoke to our driver about taking us around the city – as usual in Cambodia he had some pre prepared tours ready and waiting for us. We decided to go and see the bamboo train as well as the killing cave, finally the bat cave. This gave us a pretty comprehensive schedule for the day, and by the time we got back for the evening we really wanted to crash. Knowing that we only had one night we instead decided to wander the city for a little while and check out the buildings. 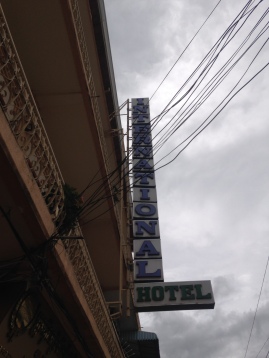 While wandering the streets at night we were lucky enough to find the Lonely Tree Café. This is where we grabbed an amazing dinner and read a little about the place. It was run as an NGO selling local crafts as well as delicious food, all of this was in aid of helping local disabled people to find work. After dinner we headed to bed, it was at this point we discovered the hotel staff sound asleep on the cot beds in the lobby!

The next morning we didn’t have a great deal of time before having to jump on our bus back to Siem Reap. But we did want to see a little more of Battambang. As it’s quite a small city we managed to squeeze in a quick visit to the central market. This odd looking building was pretty much bang in the middle of the city, we arrived at 8am and it was already bustling – as we weren’t looking for anything in particular we didn’t venture too far in – we didn’t want to get caught in some extended price negotiation and miss our bus!

We hopped onto the bus back at our hotel, sad to leave. The city being very small seemed perfect place to spend a couple of days, we left feeling like we had managed to see a good amount of it – but we were still left wanting more time!